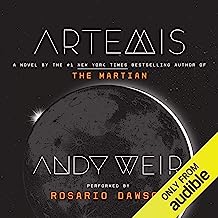 The best-selling author of The Martian returns with an irresistible new near-future thriller – a heist story set on the moon. Jazz Bashara is a criminal. Well, sort of. Life on Artemis, the first and only city on the moon, is tough if you’re not a rich tourist or an eccentric billionaire. So smuggling in the occasional harmless bit of contraband barely counts, right? Not when you’ve got debts to pay and your job as a porter barely covers the rent. Everything changes when Jazz sees the chance to commit the perfect crime, with a reward too lucrative to turn down. But pulling off the impossible is just the start of her problems, as she learns that she’s stepped square into a conspiracy for control of Artemis itself – and that now her only chance at survival lies in a gambit even riskier than the first. Bringing to life Weir’s brash, whip-smart protagonist is actress Rosario Dawson (Marvel’s The Defenders, Sin City, Death Proof). With the breathless immediacy of one realizing they’re one cracked helmet visor away from oblivion, Dawson deftly captures Jazz’s first-person perspective – all while delivering sarcastic Weir-ian one-liners and cracking wise in the face of death. And with a cast of diverse characters from all walks of life calling Artemis home, Dawson tonally somersaults to voice Kenyan prime ministers, Ukrainian scientists, and Saudi welders. It’s a performance that transports listeners right alongside Jazz, matching her step for step on every lunar inch of her pulse-pounding journey.