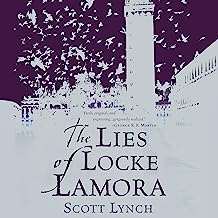 “Remarkable…Scott Lynch’s first novel, The Lies of Locke Lamora, exports the suspense and wit of a cleverly constructed crime caper into an exotic realm of fantasy, and the result is engagingly entertaining.” (The Times, London)  An orphan’s life is harsh – and often short – in the mysterious island city of Camorr. But young Locke Lamora dodges death and slavery, becoming a thief under the tutelage of a gifted con artist. As leader of the band of light-fingered brothers known as the Gentleman Bastards, Locke is soon infamous, fooling even the underworld’s most feared ruler. But in the shadows lurks someone still more ambitious and deadly. Faced with a bloody coup that threatens to destroy everyone and everything that holds meaning in his mercenary life, Locke vows to beat the enemy at his own brutal game – or die trying.  Praise for The Lies of Locke Lamora  “Fresh, original, and engrossing…gorgeously realized.” (George R. R. Martin)  “Right now, in the full flush of a second reading, I think The Lies of Locke Lamora is probably in my top ten favorite books ever. Maybe my top five. If you haven’t read it, you should. If you have read it, you should probably read it again.” (Patrick Rothfuss, New York Times best-selling author of The Name of the Wind) “High-octane fantasy…a great swashbuckling yarn of a novel.” (Richard Morgan)